What Air Conditioning System is best for me?

There are only so many times in a summer that it’s appropriate to run around the backyard sprinkler in your underwear before the neighbours start to complain, not to mention the water bill! If the Australian sun has finally made you go bonkers, then it might be time to invest in an air conditioner. Which one is the best to suit your needs? We’ve broken it down for you..

Home air conditioning systems come in several types, ranging from large central systems driven by outdoor compressors to small plug-in units that stand on the floor or mount in a window. No matter what form they take, air conditioning systems have similar working components, including a refrigerant, a compressor, a condenser, an expansion valve, and an evaporator coil. All of these work together to transfer heat and moisture from the inside of your home to the outside.

The split system is commonly found in homes as well as hotels and other multi-unit buildings. It has become an increasingly popular option for homes that are not served by a forced-air HVAC system, such as those with hot-water heating or electric heating. Most split air conditioners also offer heating as well as cooling functions.

The split system breaks the air conditioning system into two packages: The condensing unit is located on the building’s exterior and includes the compressor, condenser, and condenser fan. The evaporative unit is located on the interior and handles the air cooling and distribution. This is usually a rectangular box unit mounted high on an interior wall and contains a circulation fan, expansion valve, and evaporator coil. Refrigerant tubing passes through the wall between the condensing and evaporative units.

As above, the information is the same, the difference with multi split systems are that they can heat or cool multiple rooms using only one outdoor unit connected to multiple indoor units. Each indoor unit can also be individually controlled, scheduled and set to the desired room temperature. 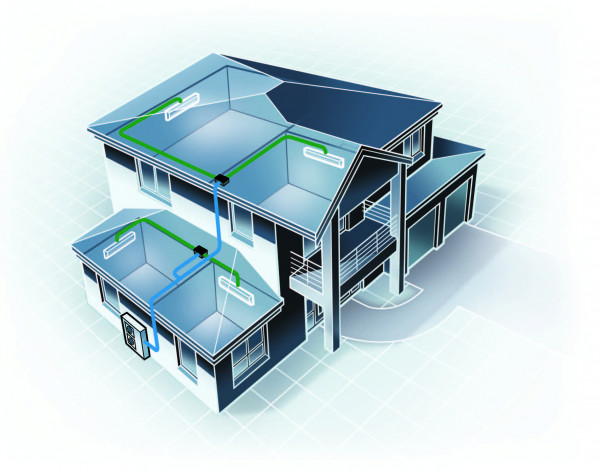 A ducted air conditioning system is the largest type of conventional air conditioner.  Unlike a split system, a ducted system provides discreet air conditioned comfort. It can be installed in a new home or tailored to suit an existing one, and once installed, only the controller, the return air and discharge grilles are visible inside your home.

Ducted air conditioners are typically the most effective type of air conditioner for cooling entire homes. They work primarily through a series of ducts to keep you cool. Ducted air conditioning has an internal fan coil unit installed in the roof space of the home. From this central location, a series of ducts run from it and into as many rooms in the house as the owner desires. From these ducts, this allows you to cool or heat each room individually – called zoning. This is done so by the thermostat on the wall, allowing you to select the temperature and other settings.

When installing a new ducted system, the primary consideration is making sure the system is sized appropriately for your home. If a system is too large, it will not perform well and will not adequately dehumidify the interior air. If it’s too small, it will not cool adequately. Proper maintenance of a central air conditioning system is also very important. 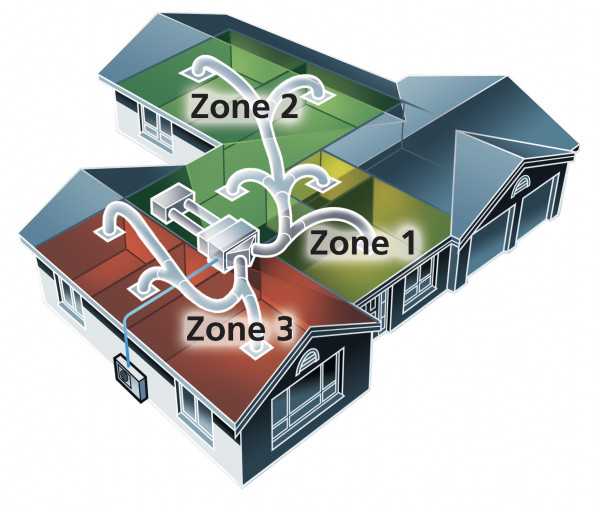 VRV stands for Variable Refrigerant Volume. A VRV system is still the only system that continuously adjusts the refrigerant volume within the system to match exactly the heating or cooling requirement in each area, for optimum comfort and maximum energy efficiency. VRV air conditioning systems are basically large multi-split systems where a number of indoor units are connected to the outdoor unit. These VRV air conditioning systems are generally used for larger applications where the alternative might be a central chilled water system or central ducted system. Against these other types of system VRV air conditioning would generally be comparable in capital cost but would quicker to install and more energy efficient to run.

Early in the morning, no matter what the time of year, the north facing rooms of a building are likely to be quite chilly, whilst those on the south side will feel a bit warmer. As the sun rises, the temperature inside the building will rise more quickly on the elevations facing the sun. Consequently, those rooms which do not benefit from this solar gain continue to maintain a requirement for heating at the same time that those south facing rooms need cooling.
With conventional air conditioning systems the occupiers of the building would be unable to enjoy simultaneous heating and cooling.
With VRF/VRV technology, however, the desired temperature is set on the user control panel and the system will constantly adapt and change with the external conditions to maintain that temperature without further user interference. It does this by ensuring that the air introduced into the room is cooled or heated to the correct temperature with the degree of cooling or heating automatically adjusted. The temperature of air introduced to different rooms will differ according to the conditions in that location.

If you need some expert advise, Advanced Air Conditioning have the answers for you! Call us today on (07) 3256 6033 to arrange one of our technicians to come out and discuss your options with you.